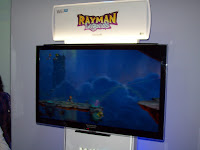 Upon having played the Rayman Legends game demo at the Wii U experience in LA, I was impressed with the fluidity of the gameplay. The demo level itself was fast pace enough to keep a player on their toes. Though at the same time, it was well tested in the responsiveness and timing departments, and thus not made too fast either. The speed of the forward-scrolling camera was definitely what stood out to me the most; slightly faster than the typical modern platformer and challenging enough to miss and fall a couple times, but certainly not unbeatable. I suppose I took great note of this aspect because of the simple observation that 'challenge' seems to come in short supply these days.


Like much of the Wii U's demo library, Rayman Legends has a multi-player co-op mode. When playing with a friend, one player uses the Wii U Game Pad's touch screen to activate check points, while the other player does the heavy lifting by navigating the actual level using the Wii U Classic Controller. Though both activities are not necessarily equally engaging, it focuses on the element of keeping up with each others' pace. A concept that does work, but again, could stand to be a little more engaging for player two. In the games defense, this equation is definitely more fresh than the traditional two-player co-op platforming layout.

﻿﻿﻿﻿
Portions of the level include foreground to background movement, which adds sort of a cinematic value in the way that it flows with everything else. Hazards throughout the level consist primarily of spikes, falls and the moving camera. Performing various length jumps by holding down the jump button for different lengths of time while running to the right is a necessary aspect to master in getting through the demo.  As for breaking through obstacles, Rayman kicks both in the air and while grounded. One could say that perfecting the timing between the jump and kick button presses practically creates a prominent gameplay mechanic in and of itself, giving the game a rhythm aspect and also making it stand out from the traditional platformer. 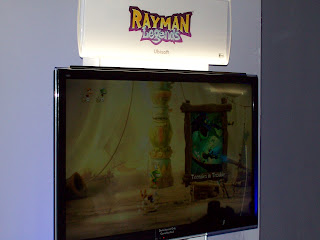 I have nothing bad to report about the game's audio. It works very well stylistically with the visuals as well as the game's rhythm-based attributes. All 2D art assets are well painted, impressive, and create a stylized atmosphere that I found easy to appreciate, especially with the level design's fantastical, ancient ruin-esque theme. The controls are certainly not over complicated, making for an impressively simple and challenging platformer, which is key for the genre. The demo's fun factor was a big plus. I can honestly say that I'm looking forward to picking up my copy and playing it again. Upon finishing the demo level, I only found myself wanting to experience more of the game.
Posted by Ravenheart - Executive Designer/Developer at 8:20 PM