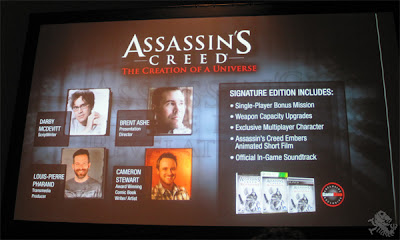 The panel started with a showing of the Assassin’s Creed Revelations CG trailer. The crowd was roaring and screaming. It got everybody really pumped. Then the panelist walked out and took their seats on stage.

The first major announcement they had was the next chapter in the Assassin’s Creed comic book series. Subtitled ‘The Chain’, it will follow the events of last year’s comic book series ‘The Fall’. Also announced was that ‘The Fall’ would be getting its own hard cover collection of all three issues plus an exclusive epilogue chapter. 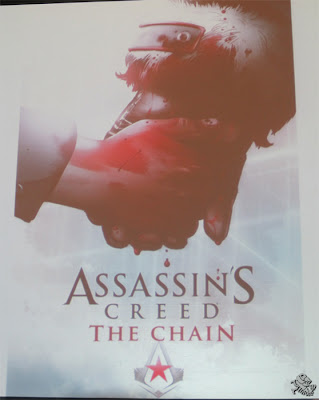 Later in the panel a trailer for the new animated short Assassin’s Creed Embers was shown. This short follows Ezio after the events of Revelations. The trailer showed a very old Ezio with his daughter, son, and wife back in Florence. Ezio narrates the trailer saying at the end, “I know I would not have enough time to do everything, now I worry I do not have enough time to do anything.” You can see the trailer here.
After a short Q&A with fans they brought all the Assassin’s Creed cosplayers to the front of the room and promised them all a signed copy of the signature edition of the game for free. 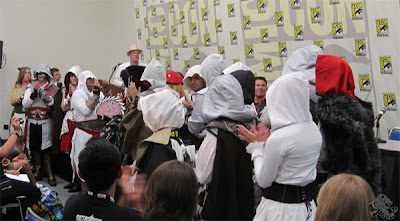 The panel closed with a special retrospective trailer featuring all of the games, comics, books, and film shorts in chronological order bringing us up to speed for the future of the series. It was a pretty fun panel; the excitement panel was really high. As an huge Assassin’s Creed fan it was a real treat to be in the same room with a thousand other raving fans. You can look forward to playing, reading and watching Revelations, The Chain and Embers this November.
Posted by Taylor Greene - Executive Editor at 3:47 PM