Almost five years to the date we have waited for the next console based 'The Legend of Zelda' title to arrive. After being teased by some concept art at E3 in 2009, Zelda fans have been waiting for this day. Now that this day has come and gone I have prepared my review for you to read.

I want to preface this review by saying that I have done my very best to not spoil anything related directly to the story and it's characters outside of the game's opening but I will be talking about certain gameplay mechanics that some might find spoilery. 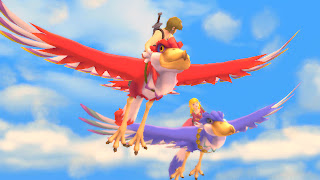 Skyward Sword is a game that is incredibly familiar but at the the same time a completely new experience in gaming. For the most part, motion controls in video games have been relegated to waggling and dancing. While no one will deny how much their minds were blown when we first played Wii Sports, with time it is easy to see how simple and basic it really was. But now, with Wii MotionPlus there is a whole new meaning to control. Obviously MotionPlus has been here for a while and if you played Wii Sports Resort many of the concepts in Skyward Sword will be familiar to you. But it is not until now that we have seen a single game take advantage of the controller in so many ways.

In Skyward Sword your Wii Remote becomes every one of your tools and weapons. You now have one-to-one control over your sword. Each strike with your sword is to be carefully placed upon your enemies as button mashing is no longer an option. Instead of waiting for an opening you have to make your own. It is something else when everything falls into place perfectly. You feel as though you are a true master of the blade. However, if you get impatient and don't take the time to fully learn how to master these controls you may end up struggling. And these times can be a little frustrating, but Skyward Sword does a good job of easing you into most of these mechanics. You will also be constantly using your full arsenal of weapons and tools throughout the entire game so you never forget how they work. 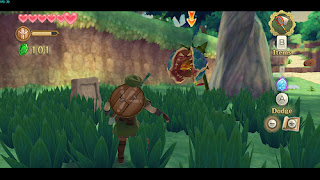 Speaking of weapons and tools; in Skyward Sword many of these items can be upgraded by visiting a vendor in the bazaar of Skyloft. Each item requires a specific amount of certain materials to be upgraded. For example your bow can be upgraded twice to increase the distance it will fire shots as well as it's attack power. You can also power up your potions with another one of these vendors by giving him insects you catch with your bug net. Ultimately, it ends up being a nifty feature but falls a bit flat. You just hand over the items you randomly find on your quest along with some rupees and a few moments later your item is now improved. It would have been nice if the system was a little deeper and more customizable. Regardless, it is a step in the right direction and hopefully Nintendo takes it to the next level in a future installment.

The story of The Legend of Zelda is one of the mostly hotly debated titles in all of video games. Skyward Sword sees to tie some of these loose ends up as well as deliver its own tight knit and compelling tale. The first hour or so of the game get you up close and personal with many of Skyloft's notable residents. Link and Zelda's relationship is taken to the next level and you start to root for them as a couple. But things never quite fall into place as they are interrupted by an traumatic event. This sets Link out on his quest; he is aided by a companion named Fi who is the manifested spirit of the Goddess Sword. There are several other important characters to the story but I don't want to reveal much more.

Skyward Sword's game world is made up of two layers, Skyloft and The Surface. Skyloft contains the main hub of the game as well as a many surrounding pieces of rock and other small islands. The Surface is where you will be spending the majority of your time in the game completing dungeons and traversing the various regions below. While The Surface is brimming with content, Skyloft feels rather empty outside of the main town. While there are some side-quests and story related content to be had above the clouds it felt like they could have done a bit more, but it is instead largely relegated to being used to travel to the different sections of The Surface. Still there is much to do in the main town and you will find yourself constantly returning and finding new things to do.
As is tradition, music plays a large role in Skyward Sword, not to the extent of Ocarina of Time but still very important. While there is a new instrument in Skyward Sword you only 'play' it at specific key story moments and you can use it to find some secrets scattered about the game world. There is also a pretty fun mini-game that uses it but the game can be challenging. The actual music in the game is incredible and for the first time in Zelda history a large portion of it is orchestrated. While I have heard many people complaining that the music in Skyward Sword is bad I could not disagree more. I will say that the music is not nearly as catchy as past titles, but that does not make it bad. If anything each piece truly fits the mood of each location and moment in the game. Some of the pieces are layered and change depending on if you are in combat. Other pieces are more atmospheric, and there are still some fairly memorable tunes. Skyward Sword's music probably compliments the game better than any other Zelda title to date.

The sheer amount of content in Skyward Sword is pretty draw dropping. Normally a new Zelda will last me about twenty hours from start to finish. Skyward Sword took me nearly forty hours to complete and I would estimate I only did around 50% of the optional side-quests. It is a testament to just how much there is to do in this game and it never begins to drag. You revisit areas several times but each time there are new places to explore or changes in the environment shake things up really well.

Another place you will be spending a lot of time are the games dungeons, which there are several of. Skyward Sword features some of the best dungeon design in the series, the third dungeon and fourth dungeons are particular standouts for myself. Much like the game world the dungeons are tight and compact but offer plenty of puzzles to solve that will make you feel like a genius occasionally. At the end of every dungeon is the moment you have been waiting for, the boss.
Thanks to MotionPlus, Skyward Sword features an amazing cast of bosses. You will find yourself in intense one-on-one sword fights, battles with massive monsters, and more. Every boss is incredibly unique and long gone is the 'repeat steps one two three and win'. These bosses have multiple phases and are often unpredictable. There were a couple bosses that maybe felt to easy but others were a real challenge and great fun to take on. The fourth dungeons boss is probably my personal favorite.

In the end Skyward Sword is one of the largest and most polished Nintendo titles to date. The swordplay will leave you a master of MotionPlus and have you wondering if you could ever go back to traditional controls. The story is all kinds of happy and sad, a bit of a roller coaster that leaves you choked up in it's final moments. If you have never played a Zelda title before now is your chance to hop on because from here on out things can only get better. The Legend of Zelda: Skyward Sword gets my highest possible recommendation. 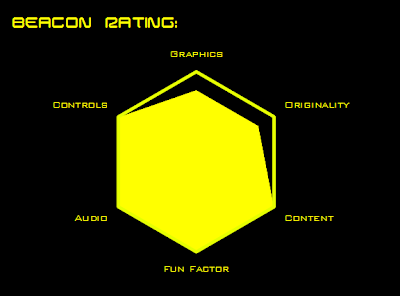 Some images from GoNintendo's Flickr.
Posted by Taylor Greene - Executive Editor at 3:32 PM