If there is one non-Nintendo game I am looking forward to on the 3DS, it would have to be Heroes of Ruin from N-Space and Square Enix. I could go on about the game, in fact I already did, and you can read about it here, but I want to take the time to talk about the demo I played of the game at PAX Prime this past weekend. 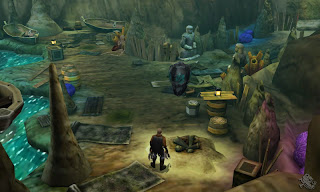 When I got to the Square Enix booth it was crazy packed, lines for Final Fantasy XII-2, Dead Island and Wakafu were huge; but I was able to walk right up to Heroes of Ruin no problem. They had three or four stations set up and two others were playing through the demo already. The demo gave me the option to join the other players but I wanted to see the demo from start to finish so I started a new game. I chose the vindicator and went with the default appearances so I could get to the meat of the game right away.
I took the first few minutes to get used to the controls. The circle pad is used to for directing your character. The B button is your standard attack, which can also be held down for a powerful spin attack which breaks through enemy defenses. The A button is the special attack, and for the vindicator it is a powerful charge which knocks enemies silly and can help you speed away from a dangerous situation. The right shoulder button allows your character to quickly roll and dodge attacks; it is also great for speedy travel. The left shoulder button is used for picking up items and putting them directly into your inventory and for talking to NPCs (non-player characters). By tapping left on the d-pad your character would drink a health potion and by tapping right on the d-pad you would drink an energy or some kind of magic potion. Lastly, by holding up on the d-pad, any item you are standing over will be automatically equipped to your character assuming it is appropriate for your selected class. 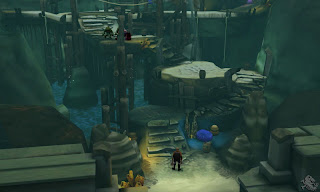 So, off I went through the Coral Tombs. The first thing I noticed was that the game runs fairly slow; with and without the 3D on there was some noticeable slowdown. Since it seemed a little better without the 3D I turned it off, but don’t worry I turned it back on during later portions of the demo. While I was put off by this at first I quickly forgot about it. There was one NPC who had information for me. I was informed I had to make my way through the tomb to find and defeat a power leviathan. How I was supposed to do that and where it was, I had to figure out on my own.
Immediately after leaving camp I ran into these amphibian creatures, they reminded me of Murlocs from the Warcraft series. There was a variety of kinds however. The most notable were the larger ones with shields. The only way to break through and do much damage to them was to charge up the vindicators spin attack and unleash on them. I then had plenty of time to finish them off while they were dazed by my attack. The other two kinds threw magical spells or spit up some kind of ground AoE (area of effect) goop which I would have to get out of or risk taking extra damage.
As I made my way through the tomb, I would find little side paths that would eventually dead end but perhaps have some caches of gold and potions lying around. At times I did find it hard to distinguish between these caches of treasure and the environment. A way to help better distinguish between random objects and scenery lying about and the treasure troves would be nice, but that’s just me nitpicking.  For the most part however, I was on a fairly linear path; I never got turned around or lost just kept going in the direction that did not end. The game also generates a mini-map as your progress through your randomly generated dungeon. And yes I can confirm the randomly generated maps were present at PAX; I played the demo two times and got two unique layouts. It was awesome and surprising I must say. 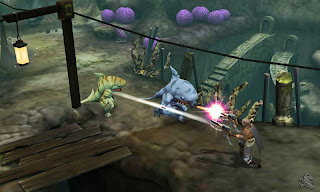 At some point I made my way to broken down pirate ship where a mini boss battle, with a pirate, awaited me. It was not too difficult, I wailed on the boss primarily as it appeared he was summoning extra enemies and I did not want to get overwhelmed.  After I finished him and his spectral companions off I found a note that the pirate had left behind. It contained the sheet music to a song that I would need to play to summon the leviathan. But before I could even do that I would need the special instrument used to play the music.
Enter the Sharkmen; half shark, half legs and all sexy. Okay, not really. There did not seem to be anything too special about these enemies other than the fact that they hit a bit harder than the previous guys. But one of their kind was holding my magical musical conch shell. So I proceeded to hunt him down and do battle with him and his companions. If I remember correctly, after damaging him so much he would summon a new wave of enemies that I would have to defeat before I could fight him anymore. At this point I had so many health potions I did not really have to worry about my health very much, so it wasn’t a particularly challenging fight. N-Space might be wise to consider scaling back the rate at which you get potions, as they are all over the place. Or perhaps they just put in a lot of potions for the purposes of the demo. 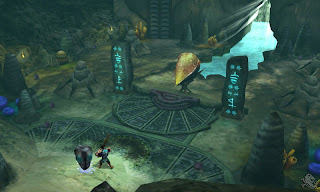 After getting my musical device I headed down one last corridor where my confrontation with the leviathan was about to occur. After turning the 3D back on and playing the song with the shell, the leviathan appeared. The leviathan itself was stationary initially; I swiped away at it and then dodged his attacks. He then receded back out of reach and several tentacles popped from under the ground. In order to get him back in attacking range I had to quickly take the tentacles down. With all the tentacles down the boss was back in range and in a dazed state. I wailed on him and then the second phase of the fight began.
Instead of all the tentacles being near each other, they were spread all around the room; also I could attack the boss at all times now but his damage output seemed to have increased. In addition to that the room also had some new obstacles such as the aforementioned goop, spread randomly around the room. Once I got the pattern down though, the boss was no match for me. Still, I was surprised at the amount of depth the fight had as well as its cinematic quality. 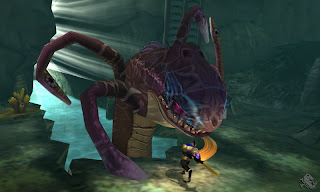 Regarding the 3D, I felt that it didn't do anything special for the game. It’s just kind of there. The Square Enix rep even commented on it saying they did not want to do anything gimmicky with it. At most it gives you the impression of peering inside your 3DS screen; while the UI (user interface) is present on the screen as if framing it like a picture. So it is there if you want it, but you don’t really need.
My time with Heroes of Ruin ran me about twenty minutes, a fairly lengthy amount of time. I made sure to explore every nook and cranny I found to fight extra enemies and loot some hidden treasure. It could have probably been done in less than ten minutes if one was rushing through the demo though. I now have a pretty good idea of what to expect when the game launches early next year. While N-Space still has plenty of time to continue working on the game, I really hope the final product ends up being as amazing as it could and should be.
Posted by Taylor Greene - Executive Editor at 7:32 PM