When you think of vehicular combat games only one name comes to mind. Sure there were some other decent games like Vigilante 8, but the one that always comes to mind is Twisted Metal. Twisted Metal is essentially the re-launch of the franchise. No unnecessary subtitles; were back to square one. It’s all about cool vehicles, awesome weapons and EXPLOSIONS. 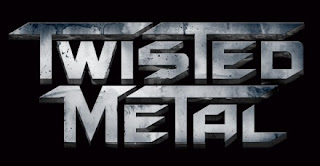 At PAX Prime this year Sony is demoing the games multiplayer modes. The match I got into was one where a player on each team is selected as the target for the opposing team. When the target dies one of the teams and opposing team gets a point. When the time runs out whichever team had more points is the winner. There are a few more match types also playable, so there is a decent variety.

The demo starts with you selecting your vehicle, which can be changed later when respawning. After a few moments the match begins and all hell breaks loose. Almost every object on the map is 100 percent destructible is you apply enough fire power or brute force. It is amazing fun to just drive around and create mayhem. The map felt huge, maybe a little too big for its own good though. A few times I struggled to find other players, though an indicator is present to help you find the targets and the battle ensuing over them.
The vehicles are awesome to say the least, each with its own attitude and personality. In addition to the standard machine gun and missiles, each vehicle comes with two other special abilities / weapons. These special abilities get pretty crazy. For example the ambulance like vehicle can launch a suicide bomber strapped to a gurney that can then be remote controlled at a high speed into nearby enemies. The vehicles aren’t restricted to just the ground either; Sweetooth’s army also includes helicopters. These helicopters can be selected just like any other vehicle; they are fast and powerful but appear to be fairly light on armor. I am sure that won’t stop players from whining about them being over powered when Twisted Metal launches.
The demo ended after ten minutes, and unfortunately I spent the first half of the match getting used to the controls. Regardless, Twisted Metal was a blast and I am approaching the game with high hopes. The single player campaign was not playable, and I am not sure most people care as this is the type of game that works best with some friends or online buddies. Prepare to pwn some noobs Valentine’s day 2012, yes that’s right February 14, 2012. Cancel your reservations, because you are going to be busy.
Posted by Taylor Greene - Executive Editor at 8:29 PM