Just last year we had the terrific Wii game, Kirby’s Epic Yarn, release worldwide. Now a year later, two more Kirby games are on the way. They are Kirby Mass Attack for the Nintendo DS and Kirby’s Return to Dreamland for the Nintendo Wii. Both of these titles are similar to their predecessors, but they both bring something new to this pink and puffy franchise.

First I went hands on with Kirby Mass Attack. The demo looked to be the full version of the game in Japanese, but since there was quite the wait to play I only went though the first level. I did notice that the world map was fairly large and the Nintendo rep assured me that there were a few more worlds in addition to the one I saw. The entire game is controlled with the stylus; you do everything with it and it works very well. 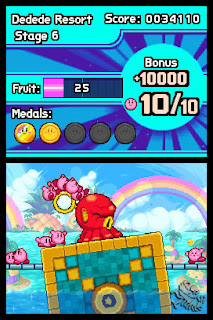 The level starts with one Kirby. You make your way across the stage all the while defeating small enemies and eating fruit. Eating fruit fills up a meter on the top screen, once the meter fills up 100% an extra Kirby appears for you to control. You can continue eating fruit to gain up to nine additional Kirbys to control. After that, any additional fruit you eat adds bonus points to your score.

With more Kirbys comes more responsibility. When a Kirby is hit by an enemy it turns blue, meaning that it has been damaged. This can be fixed by tossing the individual Kirby through special healing checkpoints by flicking it up with the stylus. Once you have ten Kirbys running around things get really fun. You can start micromanaging them by having them fight different enemies on screen or flick them upward to grab onto the huge roots of a plant that contains a hidden cache of fruit! By the time my time with game was done I couldn’t help but notice the similarities to Pikmin.

I then moved on to Kirby’s Return to Dreamland. For this demo, Ravenheart and a mutual friend of ours joined me in the game. I suppose I should mention here that Kirby’s Return to Dreamland supports up to four player drop-in / drop-out co-op; a first for the series. This game is the first traditional entry to the franchise in sometime. It plays most similarly to Kirby 64: The Crystal Shards, except with the added multiplayer aspect.

Kirby has access to his usual copying ability in which he can suck up enemies and obtain their powers. The other playable characters include King Dedede, Meta Knight and Waddle Dee. King Dedede has his trusty hammer, while Meta Knight slashes with his swift sword, none of us played as Waddle Dee so we didn’t get to see him in action. 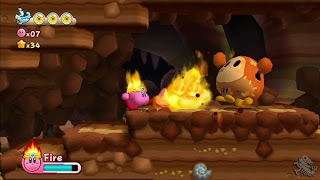 The controls were very simple. You hold the Wii Remote horizontally; 1 and 2 are attack and jump while the d-pad is used for movement. You can use your weapons in different ways when you combine with the attack button with a d-pad.

Eventually we made our way through the level and ended up face to face with a boss. The boss was some kind of bomb juggling genie. It did not take too long to defeat him, although most of us were pretty blown up by the end. The game was hectic and challenging, might have something to do with our Kirby being fail, but it was still a good time by all. 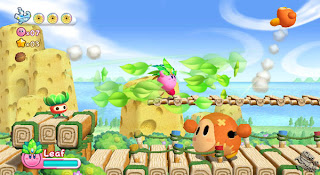 It is amazing to see so many Kirby games in less than a year’s time, but it is not a bad thing to be sure. With one of the most jam packed holiday seasons ever this year I hope I can find the time to play both of these games. Kirby Mass Attack launches 9/19/11 and Kirby’s Return to Dreamland begins 10/24/11.
Posted by Taylor Greene - Executive Editor at 6:58 PM