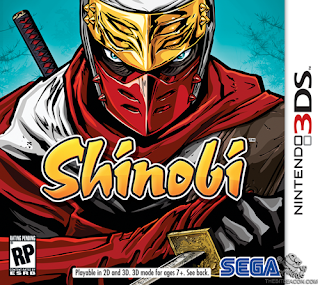 I’ll admit I have never played any of the original Shinobi games, so I went into this demo knowing nothing but that Ninjas are involved. This one was announced just a short while back, and I was surprised to see it playable at the Sega booth at E3 this year. You have a few abilities to quickly learn. A grappling hook is used for climbing up to roofs and high ceilings. The basic sword attack which can be chained into combos up to 3 times. The right shoulder button will trigger your counter/deflect ability which has to be timed very accurately. You can also rapidly throw shuriken.

The way some of the abilities were mapped onto the 3DS buttons came off as awkward. However, the Sega rep assured me that in the final game the player will be able to fully customize the controls of the game. Still it made for an awkward demo session, for me at least. The first stage was a standard side scrolling level. I had to grapple onto and underneath buildings to climb on top of them to avoid fires and other objects blocking my path. And fight off the occasional ninja grunts and a few more powerful enemies.

The game also features a scoring system. You gain points when you land attacks, counters, defeat enemies, and find items. You can multiply your score by hitting more than one enemy at once and by dispatching them in stylish ways. However, whenever you take damage you also lose points based on how hard the attack hits you.

So far everything is looking pretty good. The 3D is neat – nothing amazing but it serves its purpose well. I enjoyed the first stage however the second stage was a complete pain. You start off riding a horse and slicing down enemies as they ride up next to you. Fine enough so far, but the stage is completely on rails and all you can really do is make the horse jump and use your standard attack. All of a sudden there are fallen tree trunks everywhere. If you trip over one you take a large amount of damage and disappear off the screen for nearly 10 seconds as the stage continues to scroll along. I believe the developers of this game were thinking that the 3D would help players to navigate these horseback stages, but it just doesn’t really work out in its current implementation.

Overall, I still enjoyed my time with the game. The initial stage was good fun, but the horseback stages need some work or this game is going to frustrate people. Hopefully, Griptonite Games can polish it up before Shinobi releases an army of ninjas in September of 2011.