The newest L.A. Noire DLC, The Nicholson Electroplating Disaster, just hit digital store shelves yesterday. The case takes place chronologically right before the final case of the game, but it has little to do with what is going on at that time. So it makes sense that they would chose this case to be cut from the retail version of the game.

You assume control of Detective Phelps for this arson desk case. Phelps and his partner Biggs are relaxing when a massive explosion erupts a few blocks away. When they arrive at the scene they find an entire block of L.A. has been all but disintegrated. The investigation starts here.

This case feels familiar as do most in the game, but I would say it is a bit more action oriented than the majority of the other cases. There are several occasions where you get to pull out and use your weapon. As well as a great car chase sequence.

Questioning and interrogating take a backseat in this case. Two or three times will you be asking the questions and only a couple questions need to be answered. Instead you will spend much of the case investigating and solving a few puzzles. The crime scenes in this case are a bit more exciting to investigate as you unravel the events surrounding the explosion. The crater from the explosion and the Hughes Aircraft hangars are definitely some of the highlights. 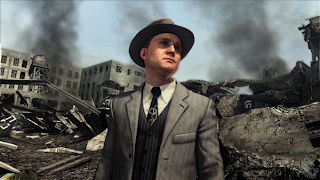 The case will last you an hour or so depending on if you get sidetracked by exploring and working on achievements. Speaking of which, the DLC also adds five new achievements and trophies, one of which is sure to be a challenge to complete.

This would have to be the best of the DLC cases released so far, in this writers opinion. With only one more case on the way in July and nothing else currently planned. The complete story of L.A. Noire is coming to a close. Rockstar is offering a package deal that gets you all of the games DLC and preorder bonuses for twelve dollars. If you enjoyed the main game I would highly recommend the purchase, on the other hand if you found yourself bored by game than the DLC is probably not for you.