A Look Back At Pac-Man 2: The New Adventures! 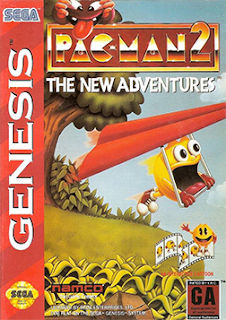 Everyone remembers Pac-Man. Who doesn't? Since 1980, he has been considered one of the god fathers of the art medium called 'video games.' His name has become almost synonymous with the term, and has been made into a symbol of the overall pop culture in the 1980's. As the first original mascot of any video game, this arcade superstar's classic debut has become such an awareness, that it holds an exhibit at the Smithsonian in D.C. Some of us may even remember the character's cartoon TV series. While reminiscing, we remember what the gameplay experience was like. And we remember the later, somewhat controversial, Ms. Pac-Man, which was not in fact, originally licensed by Namco.

In addition the extensive main series from the mind of Tōru Iwatani, our world has known a plentiful abundance of both licensed and unlicensed spin-off titles. Among the first were Ms. Pac-Man, Jr. Pac-Man, Baby Pac-Man, and Professor Pac-Man. Long after many more had hit the market, we saw an arcade title that also released on the NES, Atari Lynx and a number of home computers called Pac-Land. The gameplay was not of the classic Pac-Man format, but was instead a side scroll adventure. This came to be the inspiration for a later game on the Genesis and Super NES called Pac-Man 2: The New Adventures. 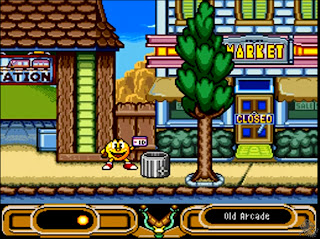 The game's mechanic is especially unique. Instead of controlling Pac-Man, you control a slingshot at the bottom of the screen that you use to influence Pac-Man and his surroundings as he constantly walks through town and other areas of the game. On the Genesis version, the “A” button launches a power pellet into the scene (crucial when ghosts are encountered), changing him into Super Pac-Man, which you can only hold up to three of. The “B” button uses the slingshot to hit objects in the game, which is aimed with a cross-hair controlled by the d-pad. And the “C” button, when used with the directional buttons, tells Pac-Man to look in the specified direction. If you don't use the slingshot and look button to warn Pac-Man of dangers, more often than not, he will walk right into them. Pac-Man's mood also plays a major factor in the game. His mood determines how he will react to your signals. In some instances, he will react positively to your warnings and thank you for it with a thumbs-up from the Pac! In other instances, in the same scenario even, he will see that you are warning him, turn and look right at you, shrug it off, and walk right into danger, or you will need to greatly pressure him. It all depends on his mood (happy, beaming, sad, depressed, angry, raging, sick, dizzy, etc.), which is influenced by you shooting fruit out of a tree for him, shooting him or his loved ones in the face, allowing him to walk into danger, etc. In many cases, you need a specific mood in order for him to do what you need him to, and the game is chock full of interesting and silly opportunities to influence his mood.﻿

As for progression, the game is divided into tasks. The first task is to obtain a bottle of milk for Pac-Baby. The second is to find a mountain flower for Lucy's birthday present. The third task is to get back Pac-Jr.'s guitar which the ghost's stole, then took off to the city. And the fourth and final task involves seeking out the ghost witch and defeating her Gum Monster built from ABC gum, which was stolen from children everywhere. The game's setting takes many aspects from the Pac-Man cartoon. In addition to the four main tasks, there are two arcades in the game where the player can experience the original Pac-Man. And, as a side quest, if you manage collect three cartridge pieces scattered all over the game world, you can play another game. In the Super NES version, that game is Ms. Pac-Man, and in the Genesis version it's a Ms. Pac-Man hack called 'Pac-Jr.' 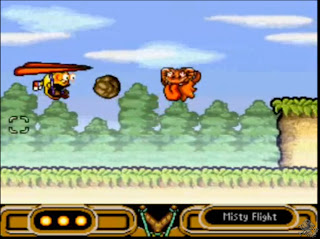 Two types of 'vehicle modes' are presented in the game as well. In one area, our star rides a hang-glider, which is mandatory for completing the second task. And there are two, sort of hidden, instances where Pac-Man takes a mine cart ride, which are not mandatory, but drop you off at opposite sides of the map. During these modes, your goal is to protect Pac-Man as he rides, by constantly sniping down ghosts (the only time when the slingshot has an effect on them) and keeping him from crashing. When riding either the mine cart or the hang-glider, the function of the 'look button' changes. While hang-gliding, it tells Pac-Man to ascend higher, and in the mine cart , it tells him to pump faster. Alternatively, shooting Pac-Man during these times causes him to descend or pop up high above the cart, avoiding certain traps.

The only combat-oriented part of the game is a showdown with the Gum Monster at the end. This battle is fought by constantly feeding Pac-Man super pellets in order keep him Super Pac-Man as much as possible, who cannot be attacked by the monster, then blasting away at its face with the slingshot. Failure occurs if the character is cornered as ordinary Pac-Man, resulting in the battle starting over. Super pellets are frequently made obtainable throughout the battle.

Pac-Man has no health or life limit. If a failure occurs, the player simply tries again at the beginning of the current area. Thus, there are no “game overs.” The game is also very notable for its lovable humor in such failures. The title received mixed review from a number of critics. For me personally, I love this game and still play it today. I definitely recommend giving it a try due to it's unique mechanical setup and fun gameplay. It still makes me laugh!

Feel free to leave comments, and join us next month as we take a look back at a PlayStation favorite!

Posted by Ravenheart - Executive Designer/Developer at 3:07 AM